I’ve been performing in folk clubs since the late 1960s (my mid-teens), initially with guitar. In the ’70s I spent a lot of time in Irish trad music sessions as well (whistle & bodhran) in Liverpool and elsewhere. In the late ’70s I did a stint as president of the Oxford University Heritage Society (following in the illustrious footsteps of Tony Rose and June Tabor), singing solo and in a four-piece a capella group with Andy Turner (Geckoes) and others.

Then in the early ’80s I took up melodeon and anglo-concertina and discovered English dance music. From ’85 – ’95 I was a morris dancer and musician in Coventry and had an English dance band – the Rum Elk Ceilidh Band. I ‘depped’ regularly with the Aardvark Ceilidh Band.

On moving (again) to Oxford I became one of the ‘Three Pressed Men‘ and got back into a capella and accompanied singing. Later, a successful dance band followed – ‘Traction‘. Both of these continue with regular gigs, albeit largely outside the ‘folk world’. I also ‘dep’ on keyboard occasionally with the Chameleons (the ‘lite’ version of the Geckoes).

My greatest love, however, is pub session music : I’m a regular at the English music sessions at the Cherry Tree pub in Steventon and the Scandinavian music session at the James Street Tavern in East Oxford. 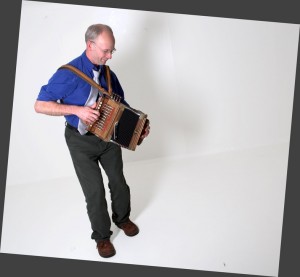 When I’m not doing music, I’m a United Reformed Church minister and (at least until May 2018) a Green Party city councillor. The evening time commitments of both make it difficult to get to a lot of music events outside regular commitments.